Processing refers to the act of arranging and describing records so researchers can find what they want and need quickly.  Processing can be very time consuming. END_OF_DOCUMENT_TOKEN_TO_BE_REPLACED

videotapes back to WKU Archives and along with the originals came DVDs of the converted tapes. We have completed uploading the videos to YouTube and the following are now available:

Kentucky Constitution Revision Debate – a town hall meeting to discuss the pros and cons of revising the Kentucky constitution with Lt. Governor Thelma Stovall and Richard Lewis debating the issue.

From Quad to DVD

This is just one of the many 2-inch quadruplex videotapes housed in WKU Archives.  These tapes were first created for use in television production in 1956.  Quads were phased out in the early-1980s and replaced by smaller videotapes. WKU no longer owns playback equipment for these tapes.

WKYU-TV recorded many programs using quad tapes that are being digitized through a $7500.00 WKU Libraries grant.  In September 59 quad tapes were shipped to Transfer Media in Indianapolis for digitization to DVD.  The first shipment of DVDs arrived at the Kentucky Building this week.

Theses titles are now available to researchers, some are available on TopScholar and on the WKU Library Special Collections YouTube channel.

END_OF_DOCUMENT_TOKEN_TO_BE_REPLACED

Comments Off on From Quad to DVD

That was the headline of an article in the Students Weekly, October 31, 1935.  The reporter goes on to say:

“Shades of the two-headed dog, Cerebus guarding the gates of Hades an the dragon that guarded the golden fleece are recalled when one seeks to enter the treasure house of the Kentucky Library at Western.  Just above the door is an old muzzle-loader and swinging in the doorway is one of the largest hornets’ nest that has been one’s fortune to see.” 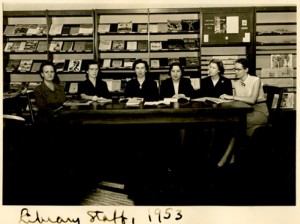 This and other articles about the WKU Libraries’ history are now available online in the first two library scrapbooks covering the period 1911 through 1959.  In addition to newspaper clippings, there are photographs of the library, faculty and staff members along with some biographical sketches of early librarians and staff.

These and other records regarding the history of Western are available in the University Archives and online through KenCat.

Comments Off on Kentucky Library is Well Guarded, Word

In 2010 a project was initiated to  digitize WKU theses and dissertations for the period 1994-2009. These theses were stored in University Archives awaiting microfilming, however with the changes in technology, the decision was made to secure funding for digitization instead.   In June 2010 the funding was secured.  The theses were checked against the microfilm and a few additional theses going back to 1935 were found that had not been microfilmed.  Each theses was checked for student permissions and a page count was compiled.  28 boxes containing 759 theses were shipped to North Carolina to be digitized.  A jpg file was created of each page and a pdf file was created of each theses.  The originals and a hard drive returned to WKU in late March 2011.  From April 5 – 26, 2011 the theses were uploaded onto TopScholar and links were created from the library catalog TopCat to assist researchers in accessing them.  They are available by department and also at Masters Theses & Specialists Projects.

Comments Off on Theses Digitization Phase I Completed