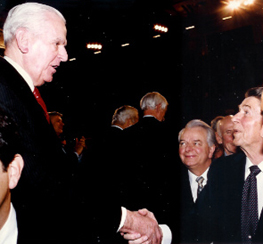 On election day, November 4, 1980, Democrat Natcher was reelected to Congress with the largest margin he had ever received but, in a Republican landslide, Ronald Reagan carried both Natcher’s district and Kentucky to become the nation’s 40th president.  Natcher had believed to the end that incumbent president Jimmy Carter might eke out a victory–but, he confided to his journal, “I was just as wrong as I could be.”

After becoming president, Reagan continued to correspond with Natcher, now chairman of the House Appropriations subcommittee on labor, health and human services, on legislative matters, but he also sent the congressman Christmas cards, birthday wishes and social invitations.  These and much more are now part of the William H. Natcher Collection at WKU’s Special Collections Library.  For more information, contact mssfa@wku.edu.