After the storm July 20th caused massive damage and leaking efforts are underway to replace the roof to Cravens Library.

The entrance to VPAL has been repoured in order to make it more handicap accessible.

Comments Off on Repairs to Cravens Library 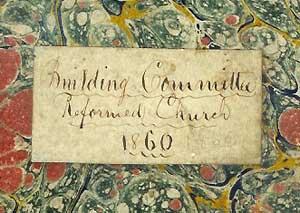 The Reformed Church/First Christian Church in Danville, Kentucky began meeting in 1843, under the leadership of Reverend Curtis Smith, who presided over the congregation from 1843-1847.  During the 1840s, the church had an average enrollment of 125 members.  The church’s first brick structure was completed in 1847.  Unfortunately, this building was destroyed on February 22, 1860 in the infamous Washington’s Birthday fire.  This tragedy almost decimated the town, demolishing 64 buildings and incurring more than $300,000 in damages.

Manuscripts Small Collection 477, found in the Special Collections Library, documents an organization in crisis mode.  The collection contains the minute book of the Building Committee of the Reformed Church [Christian] in Danville, Kentucky.  The minutes detail the transactions, contributions, and expenses incurred in rebuilding the church after the 1860 fire, planning to erect a new Church edifice as speedily as possible.”  To see a finding aid to this collection click here.  Use TopSCHOLAR to search for other church records in the Manuscripts Collection.

Construction began on the new church building in 1860, located at 4th and Walnut Street.  This structure would not be complete until 1865, after the Civil War.  The new building was dedicated in 1867.  Dr. Samuel Ayers was the main minister from the 1860s up until 1891.  The 1865 was razed after a new building was erected in 1914 at 462 West Main Street.  Interestingly, that building burned in 1965.

Comments Off on Burned Out