Seeing With the Heart 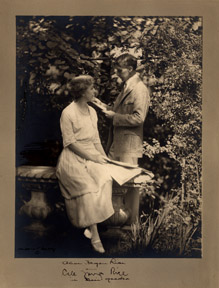 Dr. Charles & Mary Boewe recently donated a letter written by Alice Hegan Rice to Helen Keller to the Manuscripts & Folklife Archives unit of WKU’s Department of Library Special Collections. In the short 1905 missive, Rice extolls Keller’s recent autobiography The Story of My Life published two years earlier. She further notes its popularity with the girls that Rice met at a Japanese boarding school the previous summer. Rice quoted from one Japanese girl’s composition when she wrote Keller that despite her handicap “the eyes of [her] heart are open.” To see the letter in full-text and view the finding aid click here.

The Manuscripts & Folklife Archives unit owns a large collection of Alice Hegan Rice material donated by her brother-in-law, Laban Lacy Rice in 1943. That collection contains personal and business correspondence, literary manuscripts, research notes, reviews, poems and other material related to Alice Hegan Rice and her poet husband Cale Young Rice. Alice Caldwell Hegan Rice (1870-1942)  is best known for her first novel Mrs. Wiggs of the Cabbage Patch (1901), but she wrote several other books as well as short stories and literary reviews. Forlorn after his wife’s death in 1942, Cale Young Rice committed suicide a year later. Mary Boewe was familiar with the Kentucky Building’s Rice Collection, since she used the material in preparing Alice’s biography Beyond the Cabbage Patch in 2010.

The Boewes donated the letter in memory of WKU’s distinguished history professor Carlton Jackson, who died earlier this year. The Boewes first met Jackson in the early-1970s when Dr. Boewe was director of the United States Educational Foundation in India. Dr. Jackson was there on a Fulbright grant teaching American history. Their friendship grew when Boewe, in a similar position in Pakistan, was requested to help organize an American Studies program at Quaid-i-Azam University. Boewe called on Jackson, who along with a colleague designed the curriculum, taught all the courses, and saw the first group of students through to their master’s degrees. Boewe and Jackson later collaborated in bringing a distinguished Pakistani professor to WKU on a Fulbright grant.

In making the gift, the Boewes noted:  “We believe this manuscript letter by Alice Rice to Helen Keller is a fitting memorial to historian Dr. Jackson and that it rightfully belongs among others by the same author on the campus of Western Kentucky University, where already there exists the largest single collection of Alice Hegan Rice manuscript materials.” To see a finding aid for the Rice Collection click here. To search for other Rice material in the collection or other literary papers, search TopSCHOLAR.

Comments Off on Seeing With the Heart