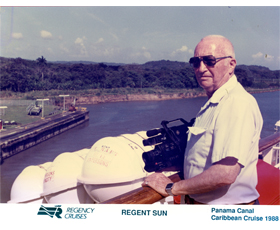 Edgar Bryant Stansbury, son of Emmet and Mable Stansbury was born 1906 in Corbin, Kentucky. He attended Shepherdsville high school and came to WKU in 1926 where he played basketball and football. Upon graduation Ed coached in Greenville and Lancaster, Kentucky high schools, married and attended Peabody where he received his master’s degree. Returning to WKU in 1935 Stansbury became assistant coach to E.A. Diddle. After World War II he returned briefly as athletic director in 1946-1947. Stansbury returned to the air force in 1947 and later worked for Honeywell. A lifelong WKU supporter, he died in Largo, Florida in 2009 at the age of 103.

He left his personal papers and photographs to WKU Archives.  This is a photo of Ed Stansbury aboard the Regent Sun touring the Panama Canal in 1988.  He and his wife Edith enjoyed many cruises during their retirement years.

Comments Off on Edgar Stansbury