On March 24-25, WKU Libraries participated in the 2nd Annual Health Literacy Summit, a multidisciplinary meeting of health professionals, health insurers, and librarians. Hosted at the Sloan Convention Center in Bowling Green, the Health Literacy Summit heightened awareness of health literacy and its impact on patient outcomes.  A consumer with good health literacy has the ability to obtain, comprehend, and use information related to health and wellness.

“I am 5 ft. 4-1/2 inches high, and weigh 125 lbs.–sometimes,” Ivan Wilson confessed in 1955.  This quiet, gentle watercolorist, who nevertheless was fond of calling himself “Ivan the Terrible,” served from 1920-1946 as head of WKU’s art department and remained on the faculty until his retirement in 1958.

A collection of Ivan Wilson’s papers documenting his professional and personal life is now available at WKU’s Special Collections Library.  Containing more than 800 items, it includes correspondence, sketches, travel journals, and clippings relating to Wilson’s exhibits.  Once reluctant to show or sell his artwork, Wilson eventually exhibited in numerous universities, museums and galleries including the Nelson-Atkins in Kansas City and the Raymond Duncan Gallery in Paris, France.

Interesting items in the collection include Wilson’s diary, which he kept in 1918-1919 as a 103-pound army recruit at Camp Zachary Taylor; his impassioned letters about art written to the president of the American Watercolor Society; his letters to a former student, Chicago architect Edward Austin Duckett, who helped him sell his paintings; and a tribute to his Irish setter “Poody” that will bring tears to the eyes of all dog lovers.  An avid naturalist, Wilson spent long hours gardening, hiking and fishing with WKU English professor John H. Clagett, and pursued hobbies as diverse as etymology, piano and the study of snakes.  Professionally, he experienced the trials of many a faculty member: campaigning for more resources for his department, trying to motivate a student athlete, and coping with the dislocations of life after retirement.

A finding aid for the Ivan Wilson Collection can be downloaded here.  For more on art and artists in the collections of the Special Collections Library, search TopScholar and KenCat.

Comments Off on “Ivan the Terrible”

In doing research related to the opening of Ransdell Hall we’ve come across several Founders Day speeches.  These are primarily from the 1960’s, but there is an especially interesting one that highlights the earliest years of WKU.  A.L. Crabb’s Founders Day Address “It Sounds So Lovely What Our Fathers Did,”  reprinted in April 1943 was delivered the previous November 16th.  In it he relates his earliest memories as a student in the Southern Normal School in 1904.  He introduces the listeners to a host of early faculty including J.S. Dickey, the Cherry Brothers, J.M. Guilliams, J.H. Clagett, M.A. Leiper and Laura Frazee to name a few.  It is a great eyewitness account of the  early years of WKU.

This and additonal records are available for researchers through our online catalog, KenCat and in the Harrison-Baird Reading Room of the Kentucky Library & Museum Monday – Saturday, 9 – 4.  Selected digitized records can be found on TopScholar as well.

Comments Off on Founders Day Addresses 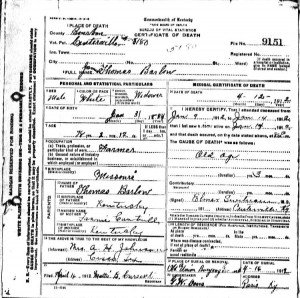 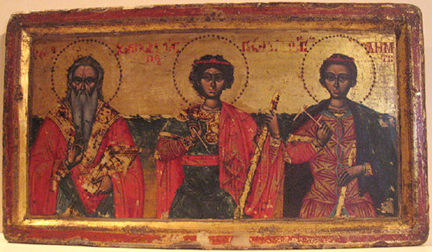 From now through May 31, artwork from the Kentucky Library & Museum is on view at the Owensboro Museum of Fine Art as part of  “The Divine in Art” exhibit, a major survey of art in a religious genre collected or produced in this region in the past century.  Two Russian icons, “Christ Pantocrator” and “Three Saints,” from the C. Perry Snell Collection are featured in the exhibit which consists of more than 150 works that date from the 15th century to the present.

For more information about the exhibit, contact the Owensboro Museum of Fine Art at 270-685-3181.

Images of other artworks in the Snell Collection are available online in KenCat.

Comments Off on Snell Collection Icons on Exhibit in Owensboro 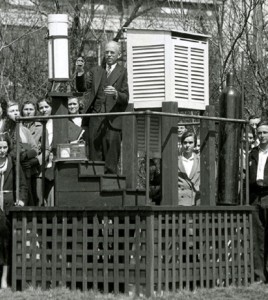 Can you identify the object that these Geography students have gathered around?

Can you identify any of these students from 1931?

Note the birdhouse in the top of the skinned tree and the radio antennae in the background.

Check back next week for answer. 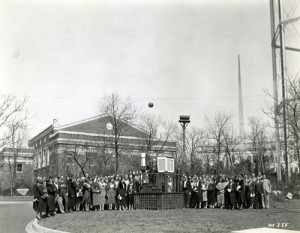 And the answer is:  Sullivan Gibson with Geography students and weather station.  Consider this an early mesonet site.

Comments Off on What is it?

As a large force of Union troops prepared to drive the Confederates from Bowling Green in February 1862, one of the town’s residents confided her anguish to her diary.  Virginia native Mary Elizabeth Van Meter (1828-1893), the daughter-in-law of Jacob and Martha Van Meter, was a Southern loyalist who decided that she and her family had to seek safety by evacuating along with the soldiers.  A typescript of Mary’s diary at WKU’s Department of Library Special Collections vividly documents her flight from Bowling Green, her travels through Kentucky and Tennessee, and her eventual return home.

Gathering a few belongings, Mary and her family left Bowling Green amid the boom of cannon, “our troops . . . having waited long enough to burn both bridges, some mills, the railroad depot, and other houses containing military stores.”  Near Columbia, they find refuge with a friend who had once invited them to stay “if ever we were driven from our home by the vile Yankees.”  She rails at “would-be King Lincoln” when she hears that a relative has died in a Federal prison.  Throughout her odyssey, Mary anxiously follows news of every battle, her spirits rising and falling with the fortunes of the South.  A year after departing, she finally returns to Bowling Green, but not before enduring a boat trip with some soldiers wearing the “hateful blue coats.”  Although her home has survived, Mary finds the rest of the town, and her world, changed forever.  “I now sit by my window all day,” she wrote, “and scarcely recognize a familiar face.”

Click here to download a finding aid for Mary’s diary, which is part of the Hobson Family Papers at the Department of Library Special Collections.  For more on the Van Meter and Hobson families, and Bowling Green during the Civil War, search TopScholar and KenCat.

Faculty Meeting and a Birthday Party

Faculty from WKU’s Department of Library Public Services had their meeting at the Electronic Resources Center (ERC) in the new Gary A. Ransdell Hall today on March 16, 2011. During the meeting, they threw a brief birthday party for Roxanne Spencer, ERC Coordinator. The meeting was concluded by a tour of ERC given by Roxanne.

Comments Off on Faculty Meeting and a Birthday Party

At noon on Thursday, March 17, 2011, the Library Leprechauns presented a St. Patrick’s Day concert with Professor Jack Montgomery on guitar and vocals, Dr. Molly Kerby on mandolin and vocals, Dr. Tom Hunley on bass, and Lesley Montgomery, vocals and percussion. Performance was held at WKU University’s newly renovated Java City Coffee House in the Helm Library. Thanks to Independence Bank for their sponsorship.

Comments Off on St. Patrick’s Day at Java City

Far Away Places Presents John All On the evening of March 17 at Barnes & Noble, the WKU Libraries’ “Far Away Places” international talk series featured Professor John All from WKU’s Department of Geography & Geology. While studying climate change in the Himalayas in 2010 as part of the Fulbright Scholar program, he scaled the treacherous northeast ridge and reached the summit of Mount Everest, at 29,035 ft. the world’s highest mountain on May 23rd.

END_OF_DOCUMENT_TOKEN_TO_BE_REPLACED

Comments Off on Far Away Places Presents John All