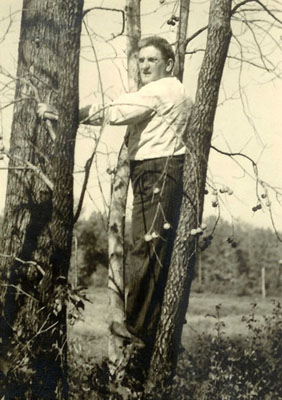 Gordon Wilson, in his ornithological habitat.

Among those who witnessed WKU’s two-day-long move from downtown Bowling Green to its new hilltop campus was Calloway County, Kentucky native Gordon Wilson (1888-1970).  But he and his classmates were not just mere spectators.  “At 1:00 p.m.,” he wrote in his journal on February 3, 1911, “students assembled at the old building and under the supervision of various teachers marched to the Hill carrying such furniture as was convenient, such as chairs.”  Books and heavier items were hauled in wagons to their new home, which was barely ready.  “[T]he Rotunda is unfinished,” Wilson wrote of Van Meter Hall, “and the great steps leading into the Auditorium are only about half complete.”

Gordon Wilson joined WKU as an instructor in 1915, and in August 1959 retired from a 31-year career as head of the English department.  Not only had he taught generations of students (in 1968, the former library building was named in his honor), but over his career had distinguished himself in two pursuits: folklore and ornithology.  Wilson published his first major article on birds in 1921, and was a founding member of the Kentucky Ornithological Society.  In 1935, he began his column “Tidbits of Kentucky Folklore,” which appeared in local newspapers for the next 35 years.

After retiring, Wilson ramped up his research and writing in both fields.  He was especially interested in the Mammoth Cave region of southcentral Kentucky–not just its bird life, but the speech, lore, superstitions and folk beliefs of its people–and his fieldwork generated numerous monographs, including Birds of the Mammoth Cave National Park and Folkways of the Mammoth Cave Region.  Always a prolific writer, Wilson still had time to compose his chatty “Diary to Kelly.”  Part autobiography, part history and gossip, it was a collection of musings to WKU president Kelly Thompson about life in general and the state of the university in particular.

Gordon Wilson’s research, writing and correspondence are part of the Manuscripts & Folklife Archives collections of WKU’s Special Collections Library.  Click here to download a finding aid.  For other collections, search TopSCHOLAR and KenCat.

Comments Off on Gordon Wilson Collection