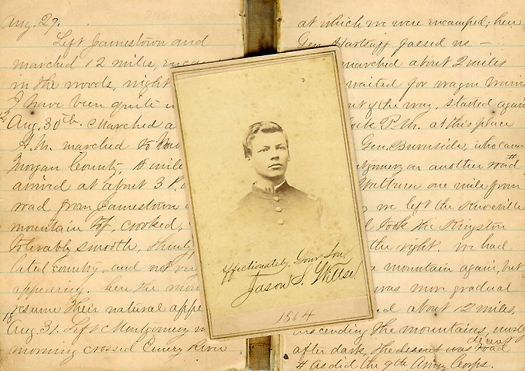 Jason Wiltse and his diary

“Another Christmas Day has come. . . .  One year ago today we were at Bowling Green Kentucky and at picket duty,” noted Jason Wiltse in his diary on December 25, 1863.  A corporal with the 23rd Michigan Infantry, 20-year-old Wiltse had spent the past year on a tour of duty that took him through Ohio, Kentucky and Tennessee.  On his long marches, he observed the weather, local geography, timber, crops, road conditions, and the fortunes of his fellow soldiers as they endured heat, cold and dust, and skirmished with the Confederates.

Crossing from Clinton County, Kentucky into Tennessee, Wiltse found himself marching through the Cumberland Mountains over rough roads before arriving at Jamestown, “mostly desolate & forsaken.”  Approaching London, Tennessee, his company “commenced drawing rations of green corn, 3 ears per day for a man.”  But he wrote with satisfaction in September that “East Tennessee, long considered impenetrable by any considerable force, has been penetrated by a large army, with wagon trains and artillery, and the country is now in our possession and the loyal inhabitants relieved of the tyranny of a desperate enemy.”

The enemy, of course, was not quite vanquished, and in November 1863, Wiltse wrote, “we halted to give them battle” at Campbell’s Station.  Enduring a “murderous fire,” he and his men “lay flat upon the ground for a long time,” the attack “sending some of our comrades to eternity”: one shot through the shoulder “and probably through the heart,” another through the cheek, and another wounded in the left knee, requiring an amputation the next day.  They withdrew from the field “obliged to leave the dead unburied, though not unmourned.”  Wiltse found the battle “a terrible example of the mad passions of man,” a sight to “make a thinking man lament more deeply, if possible, the terrible condition of a once happy country.”

Comments Off on A Thinking Man Laments