Marder packs the house for Far Away Places speaker program 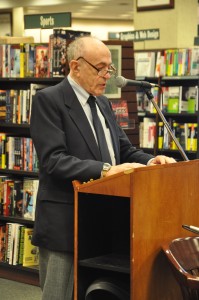 Holocaust survivor and professional violinist Samuel Marder spoke to a standing room only crowd at Barnes & Noble on Thursday, October 17 as part of the WKU Libraries’ Far Away Places speaker series. At the age of ten, Marder was a victim of the Holocaust where he lost his father during his 3 and a half years in a concentration camp in what is now Ukraine. Marder, his mother, and sister survived and eventually moved to New York. His discussion focused on the ill effects of prejudicial attitudes and behaviors and how our world continues to repeat history. He ended his program with a poem he wrote about a dream he had the night his father died, and a display of photographs from the Holocaust. Mr. Marder currently plays the violin for the Radio City Hall orchestra and conducts presentations to help combat prejudices of any kind.