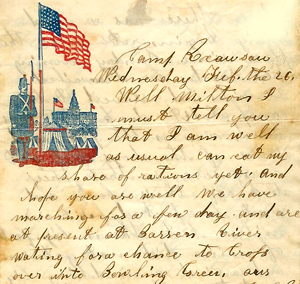 As Union troops neared Bowling Green in the wake of the Confederate withdrawal in February 1862, they found that the departing enemy had destroyed foot and railroad bridges leading over the Barren River into the town.  Camped on the north side, waiting for their turn either to ford the river or cross on makeshift bridges, some of the soldiers took time to write a line home.  Among several such letters in the Manuscripts & Folklife Archives section of WKU’s Special Collections Library is one from Vincent T. Trago, a 24-year-old corporal serving with the 15th Ohio Infantry.

Unbowed by the rigors of military life, Trago assured his correspondent that “I am well as usual [and] can eat my share of rations yet.”  During the 20-mile march to Bowling Green he had avoided the fate of some of his comrades, whose “feet got verry sore so that they took off their boots and went bare footed for 6 or 7 miles.”  Local reception of the marching men also cheered Trago.  The “Kentucky girls were fix up in their Sunday best and were standing by the road side smiling and looking as pleasant as they could,” he wrote, and their African-American counterparts seemed equally delighted with the passing soldiers.  The only sour note had come from within the ranks, where some of the men had shot off their pistols and committed other breaches of discipline, and been ordered to carry rails as punishment.

A finding aid and typescript of Vincent Trago’s letter can be downloaded here.  For more of our Civil War collections, search TopSCHOLAR and KenCat.

Comments Off on Waiting to Cross